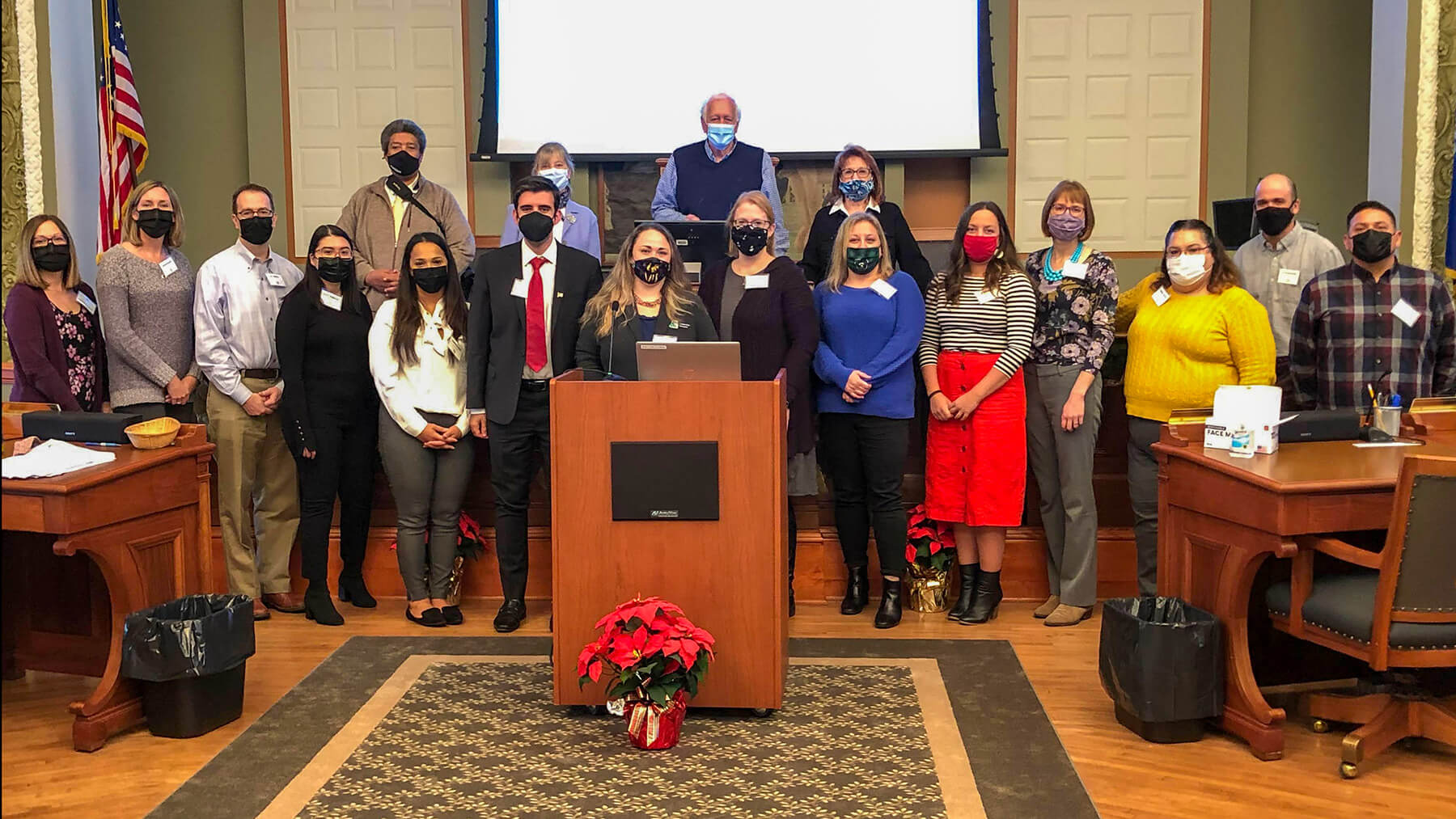 Have you ever been curious about the differences between city government and county government? For example, who is responsible for trash pick up, plowing streets, highways, and interstates? How about where the county spends most of its annual budget? Well, that is just some of the information the latest Leadership Kenosha cohort learned this month during their visit to the Kenosha County Board Chamber in the Kenosha County Administration building downtown.

The goal for the day was to increase our understanding of local government, the path to elected office, along with enhancing our skills for talking across differences and conflict management. Our day started off with a presentation from Joe Potente, Kenosha County Communications Manager, Kenosha County Executive Office, who not only provided us the background for local government, but he also shared with us a lot of the history of the Kenosha County Administration building. The building, formerly the Union Club, hosted many political dignitaries, like John F. Kennedy.

The Leadership Kenosha team also had the opportunity to meet with a local government panel and asked questions, such as, running for office, developing future political leaders, the future move of the Kenosha County Human Services offices (Job Center) to 52nd St., the future of the Uptown neighborhood, along with the conceptual plan of the Innovation Neighborhood being developed, among other topics. Members on the panel were the Town of Brighton Chair Susan Crane, Kenosha Common Council Tenth District Alderperson Anthony Kennedy, Village of Somers Trustee Jackie Nelson, and Kenosha County Board Chair John O’Day.

Kenosha County Executive Jim Kreuser was able to sit down with us and have a Q&amp;A session where he talked about his background; born and raised in Kenosha, went to Parkside, and has had a long history of state and local government service.  He will not be seeking reelection and is looking forward to retirement.

In the afternoon we were joined by Cameron Swallow, Leadership Kenosha alum of 2020, who presented a Braver Angels De-Polarization Workshop. Braver Angels is a citizens' movement to bring liberals &amp; conservatives (or other opposing view groups) together at the grassroots level to depolarize America. We learned about our own inner self, strategies to counteract polarization, and other skills to help bring groups far apart closer together.

By the way, the questions I asked at the beginning regarding the differences between city and county government? Trash pick-up is a local government responsibility and not the county.  For snow plowing, the county is responsible for county roads, and they all have letters, like Hwy H, L, S &amp; E to name a few. They are also responsible for the interstate. Their trucks are often larger since they need to go up steeper hills than the city, which is generally flat. And the largest expense in the county budget… is the Sheriff’s department.

Overall, our Leadership Kenosha group learned so much about local government and the challenges it takes to lead as an elected official. I’m sure many of us walked away wondering if we had what it takes to consider a future elected official role to serve our community.